A personal reflection on the World Bank, Jim Kim, and David Malpass

I had met Kim back in 1995 at a protest against the IMF and World Bank in Washington, DC. It was no more than a handshake, but I was thrilled to meet the lead editor of Dying for Growth, a remarkable compendium of articles about the disastrous impact of IMF/WB policies on health around the world. It was one of the pillars of the multi-sectoral work I did with the 50 Years Is Enough U.S. Network of IMF/WB critics.

He had left Partners in Health well before his nomination and gone on to other, less movement-friendly positions, such as the presidency of Dartmouth College. But still, he was Jim Kim; he at least had been “one of us.” What was I, a dedicated campaigner against the U.S. monopoly on the WB presidency, to do?

I didn’t support the U.S. nomination of course, but I wasn’t so passionate in opposing it as I might otherwise have been. Less sentimental colleagues led the charge. But now that Kim has left, we know that he will be remembered primarily for turning the Bank into an even bigger booster of private-sector domination of development than it already was. So much so that he decided to bail on the job when Trump could nominate his replacement, apparently to get the obscene payoffs that await investment bankers with insider experience. Not exactly what I had been hoping for. END_OF_DOCUMENT_TOKEN_TO_BE_REPLACED

The World Bank’s Board established as its third criterion ”the ability to articulate a clear vision of the World Bank Group’s development mission.”

It’s not a prospective candidate’s fault they have to do it: the Board’s word salad Forward Look strategy, and the IBRD/IFC capital package agreement as articulated in the Sustainable Financing for Sustainable Development Paper would challenge a Kennedy, an Obama, and even a Churchill. A PowerPoint would be so long with small-font slides that Donald Trump would go back to watching FoxNews.

“Our Dream is a world free of poverty” was a clear message Jim Wolfensohn used to inspire the Bank and its partners. Eventually its sentiment became the headline of both the MDGs and SDGs, and the first goal of each. Freeing the world of poverty has inspired development practitioners, official development agencies, and civil society organizations. Dr Kim’s Twin Goals embraced and expanded the poverty eliminated goal. But the expanding shared prosperity lacked the clarity of meaning, and inspired little agreement on how, so that the “Twin Slogans” got little traction as a lodestar with practical actions attached. Various attempts to be practical, like “Cascade” were advanced, but haven’t won universal favor. Dr Kim’s Human Capital Index was another framing, and reflected (some) research and his own proclivities and comfort zone. Inside the Bank, there’s resentment about yet another framework for client dialogue. The Bank’s external critics have seized on it as abandoning a rights-based approach, obscuring long-standing critiques of Human Capital Theory (HCT) and its notion of ‘capitalisable humans’, seeking to shame, and ignoring income inequality within a country. END_OF_DOCUMENT_TOKEN_TO_BE_REPLACED

The World Bank’s board published its timeline and criteria for selection last week and it’s a cut and paste from the last time there was a proper selection process in 2012 (we won’t count 2016 as there was no pretense that anyone other than the incumbent should apply).

The main critique I made of the process in 2012 still stands now:

But here’s the most damning point.  The list of qualifications for the job does not mention the need to know anything about developing countries, or anything about poverty reduction.

The obvious reason for this is that the US has a track record of finding it difficult to rustle up candidates who have this kind of experience – in this regard Jim Kim was a rare exception, even if his experience was very thin on other elements of the job description.

Prior to Kim, we had:

END_OF_DOCUMENT_TOKEN_TO_BE_REPLACED

This morning we had official confirmation from the Bank that Jim Kim will not face any competitors in his bid for his tenure at the Bank to be renewed. With absolutely no intention to reduce this coronation to a farce-like procession, the Bank has indicated they will strictly adhere to the appropriate procedures.

These 2011 procedures are worth quoting: 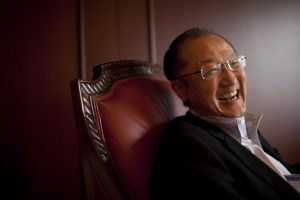 Well, so much for that.

Kim will shortly be interviewed by the board and should that process determine that he is the best candidate in a field of one expect an October announcement confirming Kim’s re-appointment at the forthcoming annual meetings.

Tick-tock, tick-tock – that is the sound of time slipping away from the World Bank’s efforts to hold on to whatever remains of its legitimacy as a global development leader that lives by and values its own rhetoric about democratic governance, meritocracy and transparency.

As the minutes of 14 September 2016 slip inexorably away, so does the likelihood that any of the Bank’s shareholders will dare put forth a candidate to compete with the US’ anointed heir to the throne, as today is the deadline for nominations.

Perhaps one should not complain.  Surely a three week nomination period beginning at the height of the summer holiday season is evidently plenty of time for careful and considered discussion and nomination process for the leader of ‘the world’s pre-eminent’ development institution.  It is clear, after all, that the US found plenty of time to carefully consider the various options and to make the necessary calls. Who could possibly disagree – we mean, of those who count, excluding those pesky critics from misguided NGOs or spoiled staff crying over their lattes? END_OF_DOCUMENT_TOKEN_TO_BE_REPLACED